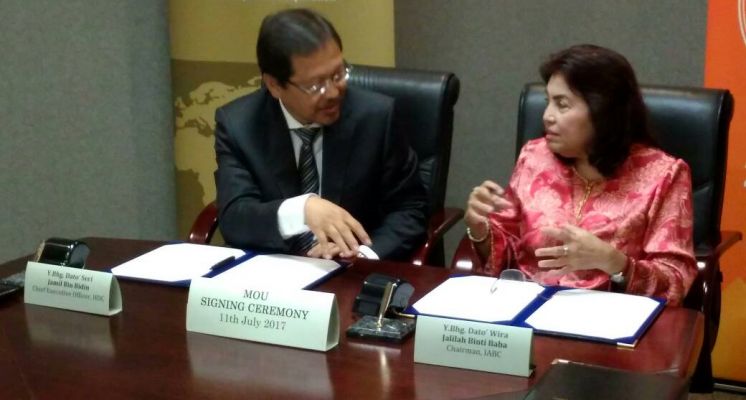 Promotion of the trade of halal products between the Iran and Malaysia was placed on the agenda of IRAN-ASEAN BUSINESS COUNCIL(IABC) following an economic seminar that was jointly organized by Iran-ASEAN Business Council (IABC) & Halal Industry Development Corporation (HDC) as” Halal Industry Business Opportunities in Iran” which was held with presence of Hers Excellency Marzieh Afkham, the Ambassador of the Islamic Republic of Iran; Datuk Ahmad Maslan, First Deputy Minister of MITI; in Convention Centre of Ministry of International Trade and Industry of Malaysia on 31 May 2016.

The most prominent discussed items were as following:

Considering that Iran is one of the main suppliers of raw materials and products; while Malaysia, as a tourist country that sets itself as a major market for Muslims in the world; the development of bilateral trade relations between the two countries in the field of halal products will lead them to economic flourishing. Both HDC & IABC seek to achieve following:

In the following, Datuk Wira Jalilah Baba presented a summary of the activities of IRAN-ASEAN Business Council (IABC) and its upcoming plans to establish effective communication for the development of trade in halal products between the two countries, and it was decided to set up a joint working group consisting of both sides’ representatives.

One of the most important tasks of the IRAN-ASEAN Business Council (IABC) is the use of the Business Information Centre (BIC) to link Iran-Malaysian economic counterparts, given the significant number of Iranian businessmen who are interested in trade relationship with Malaysia.

Considering the dispatching of the Malaysian trade delegation to Iran in late October to visit Iran Expo 2017 by IRAN-ASEAN Business Council (IABC), it was decided to use this opportunity to hold economic meetings and negotiations between economic partners working on halal products. Therefore, one of the main plans of IRAN-ASEAN Business Council (IABC) is focussing on planning these meetings during the trip.

At the end of meeting, after signing of the Memorandum of Understanding (MOU) by Dato Seri Jamil Bin Bidin, Chief Executive Officer of Malaysian Halal Industry Development Corporation, and Datuk Wira Jalilah Baba, Chairman of IRAN-ASEAN Business Council (IABC), the representative of two sides were introduced to follow up the related matters.